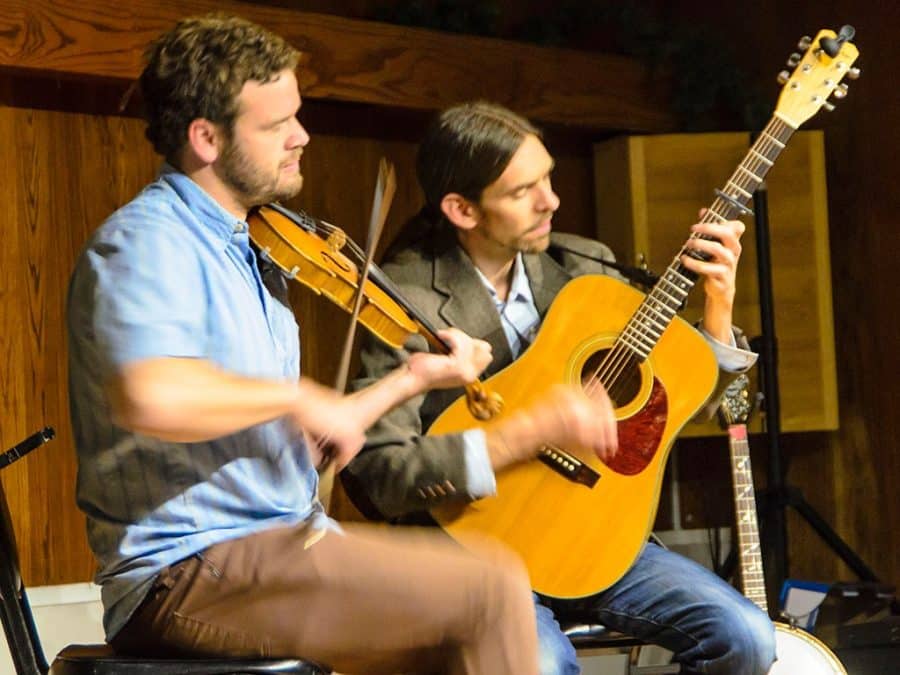 Adam Agee and Jon Sousa began playing together in Boulder, Colorado in 2005, and have become two of Colorado’s most sought-after traditional Irish musicians. They have been “journeying together through the Irish idiom” on fiddle (Adam), and guitar/tenor banjo (Jon), enchanting listeners on both sides of the Atlantic Ocean. They moved to Ireland in 2008 to immerse themselves in the music, land, and culture, living in Ennis, County Clare, and taking part in the vibrant session community there. They moved back to Boulder in 2009, where they continued to hone their sound as a duo. Their connection to their instruments and the transcendent energy in their music is guaranteed to captivate and uplift audiences of all ages.
In recent years, they have appeared at the Spanish Peaks International Celtic Music Festival, performing as a duo, as well as part of Take Down the Door, and stellar musicians Martin Hayes, Dennis Cahill, John Doyle, and Robbie O’Connell. They were the headline act at the first annual Durango Celtic Festival in March of 2013, and have also performed with Bonnie Paine of Elephant Revival fame in Loveland, Colorado. Visit Adam and Jon
Press
“This fiddler and guitarist from Colorado are creating waves across the States and beyond. Not only do they play the music of the Auld Country with sensitivity and soul, they also bring their own brand of modernism to the Irish tradition.”
—Irish Music Magazine
“Adam’s music has been familiar to me for many years… I’ve never heard him play a note that wasn’t sincere and from the heart. His music is true and free from pretense. He constantly seeks the deepest expression of the music.”
—Martin Hayes