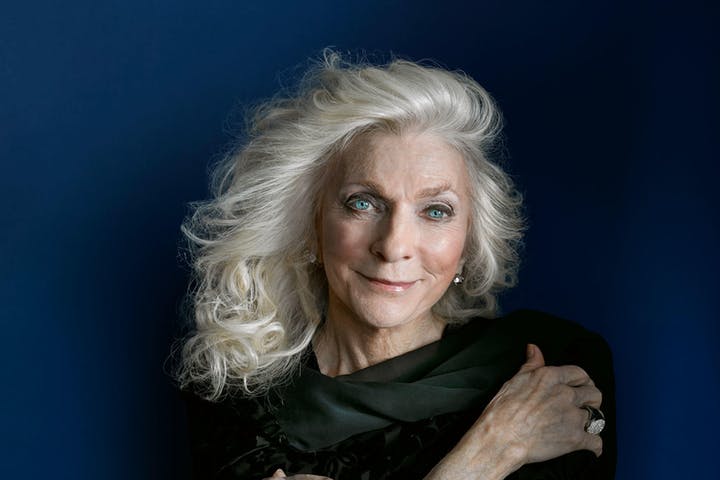 Judy Collins has inspired audiences with sublime vocals, boldly vulnerable songwriting, personal life triumphs, and a firm commitment to social activism. In the 1960s, she evoked both the idealism and steely determination of a generation united against social and environmental injustices. Five decades later, her luminescent presence shines brightly as new generations bask in the glow of her iconic 50-album body of work, and heed inspiration from her spiritual discipline to thrive in the music industry for half a century.
Her stunning rendition of Joni Mitchell’s “Both Sides Now” from her landmark 1967 album, Wildflowers, has been entered into the Grammy Hall of Fame. Judy’s dreamy and sweetly intimate version of “Send in the Clowns,” won “Song of the Year” at the 1975 Grammy Awards. She’s garnered several top-ten hits gold- and platinum-selling albums. Recently, contemporary and classic artists such as Rufus Wainwright, Shawn Colvin, Dolly Parton, Joan Baez, and Leonard Cohen honored her legacy with the album Born to the Breed: A Tribute to Judy Collins.

Chatham County Line is Raleigh, NC-based with Dave Wilson, John Teer (mandolin/fiddle), Chandler Holt (banjo), and Greg Readling (bass, pedal steel, piano)—A veteran ensemble at the top of its game sticking to its considerable strengths—poignant songwriting and inventive acoustic arrangements that draw upon a broad array of American roots influences, highlighted by trademark three and four part harmonies that shine throughout while remaining mindful of more modern influences, including its members’ backgrounds in rock bands.