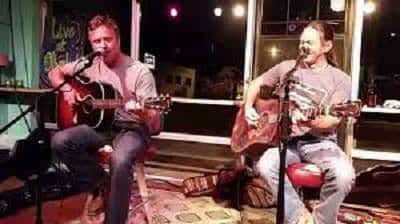 Memphis’ favorite sons and popular traveling troubadours are stopping in La Veta for an evening of swapping songs, story telling, a few beers while having a down-home good time.

Originally from Memphis, TN, it was here Jed began playing music and found his mentor, Keith Sykes. For a number of years, Zimmerman and Kelley Mickwee played music and toured together. Sykes was instrumental in recording their music, and the two released three records while they were the duo, Jed and Kelley. Eventually he landed in Texas where he got to personally hear and see the likes of Guy Clark, Joe Ely, Rodney Crowell, and John Prine – all of which are major influences on his songwriting to this day. Jed then spent a good period of time living in Taos and Red River, New Mexico, where his songwriting was heavily influenced from the people and landscape of the southwest.

With a career that has spanned four decades and traversed more than a million miles, versatile singer-songwriter Jimmy Davis is the literal embodiment of the much too often used term “troubadour”.  This Memphis, Tennessee native musician, who first graced local stages at age 9, brings an infectious enthusiam to every performance.