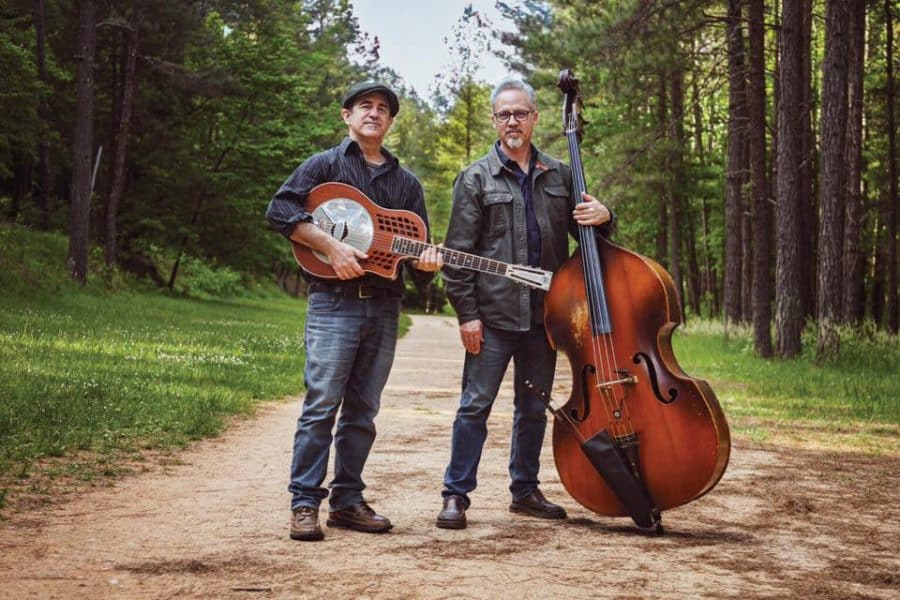 About Jon Shain and FJ Ventre
Jon Shain is a veteran singer-songwriter who’s been turning heads for years with his words and his fiery acoustic guitar work, and his evolved musical style – combining improvised piedmont blues with bluegrass, swing, and ragtime. Shain had the good fortune to learn directly from a number of NC’s older blues players and became a member of Big Boy Henry’s backing band. He is the 2019 winner of the International Blues Challenge in the solo/duo category. In addition, Shain was a finalist (along with FJ Ventre) in the 2009 International Blues Challenge, he won both the 2008 and 2018 Triangle Blues Society’s Blues Challenge, and was the 2006 winner of NC’s Indy award for Best Folk Act. Shain’s most recent solo disc, Gettin’ Handy with the Blues: A Tribute to the Legacy of WC Handy, was released in January 2018. Shain’s newest album, Never Found A Way to Tame the Blues, recorded along with long-time collaborator FJ Ventre was released in July.
FJ Ventre and Jon began playing music together in 1982 when they met in high school. FJ went on to the University of Massachusetts-Lowell, earning a B.A. in Music Performance and Sound Recording. He remained in the Boston area, performing in the city’s vibrant music scene. Since relocating to Chapel Hill, NC in 2000, Ventre has performed with his own group The Swang Brothers, as well as most of the Triangle’s roots acts. In addition to performing as a sought-after sideman, he spends his time behind the mixing board, and engineering at his own Good Luck Studio. With Jon, they have become sought-after producers in the folk/Americana genre, producing several charting Folk and Blues albums in the last few years. https://jonshain.com/jon-shain-and-fj-ventre/
+ Google Calendar+ iCal Export