California Peak, the 84th highest peak in Colorado, sits along the spine of the Sangre de Cristo Mountains directly north of  Mt. Blanca.

The 13,855-foot thirteener is more specifically located on the Sierra Blanca Massif, 12.1 miles north of the Town of Blanca, on the drainage divide separating the Rio Grande National Forest and Alamosa County from San Isabel National Forest and Huerfano County.

There are two trailheads for climbing California Peak. Access from the west is through the Zapata Ranch subdivision (a gated community), and access from the east is from the Zapata Trail or Lily Lake Trail in Upper Huerfano Valley.

The following is an account from hikers who climbed California Peak via the Zapata Trail:

The trail started off pretty steep through some heavy timber and crossed several small creeks. About one mile in, the trail leveled into a beautiful meadow. Here, we went through a gate in the barbed wire fence and almost immediately lost the trail.

There were markers (cairns), but they were few and far between. On our descent, we followed the trail easily and found exactly where we lost it on the way up. We entered the meadow and headed south onto a small rock pile and couldn’t see any more markers.

If we had continued south for another fifty yards or so, we’d have found the trail easily, but we didn’t. Instead, we headed into what looked like an easy sloping meadow to the northwest and headed straight for the saddle we could see on the ridge above.

We ended up bushwhacking another mile up the hill into a large area of blowdown and spent a lot of energy climbing through the tangled fallen tree trunks. However, at the top of the blowdown we found the real trail and followed it up onto the saddle.

At the crest of the ridge we found a sign marking the boundary of the Sangre de Cristo Wilderness Area. From this point, the Zapata Trail continued over the ridge and down. We turned south and went up a reasonably easy grass slope.

As we went up, the grass gave way in spots to bowls of talus. The view to the northwest was of the Great Sand Dunes, Kit Carson Mountain, and the Crestones. We watched clouds form below us on the west side and blow up and over us, only to clear the ridge and dissipate again on the east side.

It was a different climb. We would come over a knoll only to descend for 200 feet and climb 300 feet up another knoll. Most of the way we had a drop off immediately to the east of us. At times, we contoured west to go around a knoll or two, but that edge was with us almost all the way to the summit.

The problem? Which knoll was the summit? Finally, we reached a place where there was only rock above us and no vegetation. We traversed to the west, actually spiraling upwards towards what turned out to be California Peak itself—finally!

You’ll know you are there because it is starker with looser material than anything else around. There is a summit cairn, and a register kept by the Republic of Texas Mountaineering Club. We signed it, had lunch, took pictures of the surroundings, and headed back down. 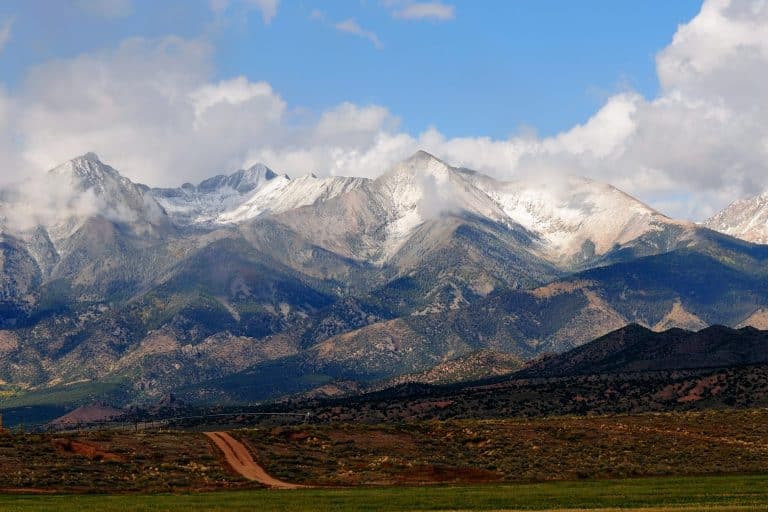