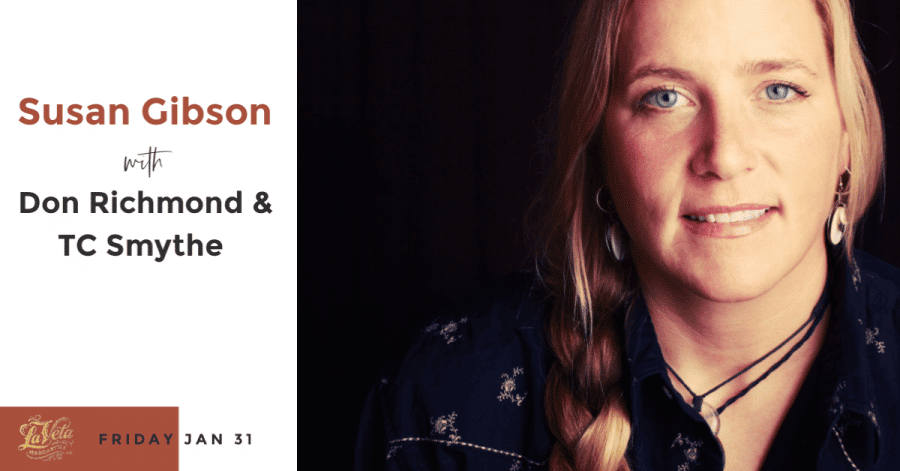 One of the reasons Susan Gibson always keeps a banjo close at hand, be it in the studio or at every show she plays, is because she likes the “lift” it brings to counterbalance a particularly heavy lyric: “Almost like it’s got a smile attached to it,” she says. But as much as she loves the instrument, the fact is, she really doesn’t have to reach for it that often. For proof, just listen to The Hard Stuff — the award-winning Texas songwriter’s seventh release as a solo artist. Much like the EP that preceded it, 2016’s Remember Who You Are, the aptly-titled The Hard Stuff is rooted in grief; Gibson wrote the album in the midst of coming to terms with the death of first one parent and then the other in the span of four years, a time during which she says her career became far less of a priority to her than her family. But it was that very period of slowing down for emotional recalibration that ultimately pulled her out of the dark and back into the light.

Of course, anyone familiar with Gibson’s music knows that she’s had that in her all along, from her salad days in the beloved Amarillo, Texas-based Americana band the Groobees back in the 90s and from the get-go of her solo career with 2003’s Chin Up. It was even all there at the very beginning, when she wrote a little song in college called “Wide Open Spaces” that grew up to become (with a little help from the Dixie Chicks) one of the biggest country songs of all time. Turns out all she had to do to rediscover it and get herself back on the road to embracing both life and art was to heed the best advice her father ever gave her, three little words that millions of Dixie Chicks fans (and a whole lotta Susan Gibson fans over the years, too) sing along to at every show: “Check the oil!”

Susan will be joined on stage by longtime friends and collaborators Don Richmond (producer and member of The Rifters) and TC Smythe (Smythe & Taylor).