Kit Carson grew up on the Missouri border, watching his older brothers, one-by-one, disappear up the Missouri River or over the Santa Fe Trail.

After his father died in a field accident, his mother apprenticed him to a saddle maker in Franklin. That life didn’t suit him, and in 1826, at the age of 16, Kit ran away and joined a wagon train bound for Santa Fe.

After a bit of traveling around with the wagon trains, he showed up in Taos and took a job with a group of mountain men needing a helper. This led him to become a full-fledged fur trapper, and for a dozen years, he roamed all over the west, living by his traps, his rifle, and his wits. In his later years, he referred to this as the happiest time of his life. 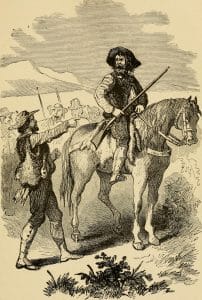 During this period, he married Grass Singing, an Arapahoe girl. They lived blissfully in a tepee and had a daughter, Adaline, and a son, Robert. During the spring hunt of 1841, young Robert fell into a kettle of boiling soap and died. Not long after, Grass Singing contracted a fever and died, too.

After this tragedy, Kit left for Bent’s Fort, where he met up with Lt. John C. Fremont. Fremont happened to be preparing a mapping and exploration expedition for the Army to the Rockies and needed a guide. As the Army paid much better than Bent, St. Vrain & Company, Carson jumped at the chance and, over the next several years, guided three of Fremont’s expeditions throughout the West.

Between the first and second Fremont expeditions, Kit drifted down to Taos where he meant to ask a bright-eyed beauty named Josefa Jaramillo for her hand. Unfortunately, her family had problems with this. Carson was a 34-year-old foreigner. Josefa was only in her mid-teens.

The Jaramillos were slowly won over and the couple wed. As a wedding gift, Kit gave Josefa the rambling adobe home in Taos they would live in for the next twenty plus years. Today, this home houses the Kit Carson Museum. 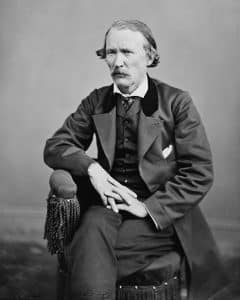 Kit and Josefa raised seven children in that house, even though there were some problems caused by Kit’s irregular income and his long absences from home when he worked as a guide.

In 1854, Carson received a federal appointment as Indian Agent for the Utes and Jicarilla Apaches, a job that gave him a regular salary and allowed him to stay home much more. However, he was still called out regularly on Indian business.

Once, when he was away, a party of Utes stopped by his agency office. Josefa went to speak with the heavily armed warriors who said they had business with “Father Keet,” the name they used to address Kit. After telling the warriors that her husband wasn’t there, she noticed a small Navajo boy sobbing on the saddle behind one of the Utes. When she asked about him, she was told that after they were out of sight of the settlement, they were going to kill him because of his constant crying. Horrified, Josefa quickly asked them what they would accept as a ransom for the boy. The Utes had a quick conference and replied that they would trade him for a strong, young horse. The trade was made.

In the fall of 1860, Kit went hunting with some friends in the San Juan Mountains of southern Colorado. On a steep trail, his horse took a spill and Kit suffered serious internal injuries. He recovered but was left with recurring pain and physical damage that would eventually cost him his life.

During the Civil War, Kit resigned as Indian agent and took a commission as a Colonel in a New Mexico volunteer regiment. He was in the thick of the fighting in New Mexico until the Southern army was expelled in 1862. Shortly after, General James H. Carleton dispatched Kit on a campaign to defeat the Mescalero Apaches east of the Rio Grande.

Once he had accomplished that, Kit was then sent to subdue the Navajos of Arizona. He tried to get relieved from this assignment, but Carleton appealed to his strong sense of duty and patriotism and eventually talked Carson into it. 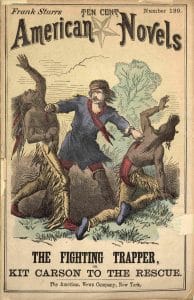 Carson recruited a company of Ute scouts and marched west with his regiment. Through vigorous campaigning during the second half of 1863, he forced some 8,000 Navajos to surrender. The Navajos suffered about 50 casualties, mostly at the hands of their bitter enemies, the Utes. This was considered a remarkable military achievement because if anyone else had been in command, the Indian losses would have been much greater.

Ironically, in recent years, Kit has been stigmatized as a wanton killer and brutal oppressor of Indians. But in his day, he was regarded as an Indian lover. General Sherman once commented that the Indians trusted Kit Carson above all other white men, including the President.

After carrying out several other military assignments, Kit was given command of Fort Garland at the foot of Mt. Blanca in southern Colorado. With a permanent station, Kit was able to bring up his wife and kids from Taos and lodge them in the commandant’s house—a primitive log structure in the center of officer’s row at the fort.

His kids loved it, using the whole fort as their playground. While at the fort, Kit began to suffer serious after-effects of his horse accident in 1860, such as chronic chest pain and began to worry about the future of his family. This led him to apply for the higher-paying job of Superintendent of Indian Affairs for the Colorado Territory.

While waiting for the new job to develop, Kit resigned his Army commission and moved his wife and kids to Boggsville, near Las Animas, Colorado and close to Bent’s Fort. He had friends there and hoped to get started in ranching.

In January 1868, the appointment as Indian Superintendent came through, and a few weeks later, he was asked to accompany a delegation of Utes to Washington for treaty negotiations. Josefa was pregnant with their last child and Kit was hurting, but his sense of duty forced him to make the trip. Besides, he thought there might be a doctor in the East who could help him.

After completing his Indian business in the capital, Kit saw several doctors who all agreed his case was incurable and that he actually might die at any moment. Kit rushed back to Josefa, first by train to Cheyenne, then on a stagecoach to Denver, and then in an open buckboard down the Front Range to Pueblo.

In Pueblo, he went to see Dr. Michael Beshoar. The doctor gave him some cherry cough syrup with opium and quickly examined him. He found an aneurysm of the carotid artery, a bulge in the weakened artery wall big enough to see. It could burst at any time and Kit would die.

In an even greater hurry, he descended 85 miles down the Arkansas River to Boggsville. Josefa hitched up the wagon and rode out to meet him. Two days later she gave birth to Josefita (Josephine) and ten days later Josefa died.

Kit executed papers making his in-law, Tom Boggs, guardian of his children and executor of his will. On May 14, Tom took Kit to Fort Lyon, east of Boggsville, where he was placed in the quarters of the post surgeon, Dr. H. R. Tilton. The doctor remained at his bedside until the afternoon of May 23, 1868 when Kit requested a buffalo steak. He ate the steak with relish and then called for his pipe. At 4:25 pm, he uttered his last words, “Adios, compadre. Adios!” and died with blood gushing out of this mouth.